Cyprus amongst the happiest countries in Europe!

Cyprus are amongst the top 50 happiest countries in Europe according to a new index developed by scientists.
The system for judging a nation’s satisfaction is based on official statistics rather than questionnaires answered by some of the population.
Data on a country’s development, freedom, solidarity, justice and peace are measured to build rankings and work out how people can be made happier.
Of 13 countries on which the index was tested, Iceland and Sweden come out on top, with a 76 out of 100 score. Austria places third on 74, and the UK fourth with 69.
Experts hope analysing countries this way could help develop strategies for their countries to improve people’s happiness.
Here is the table: 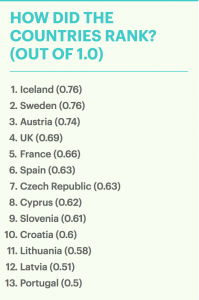